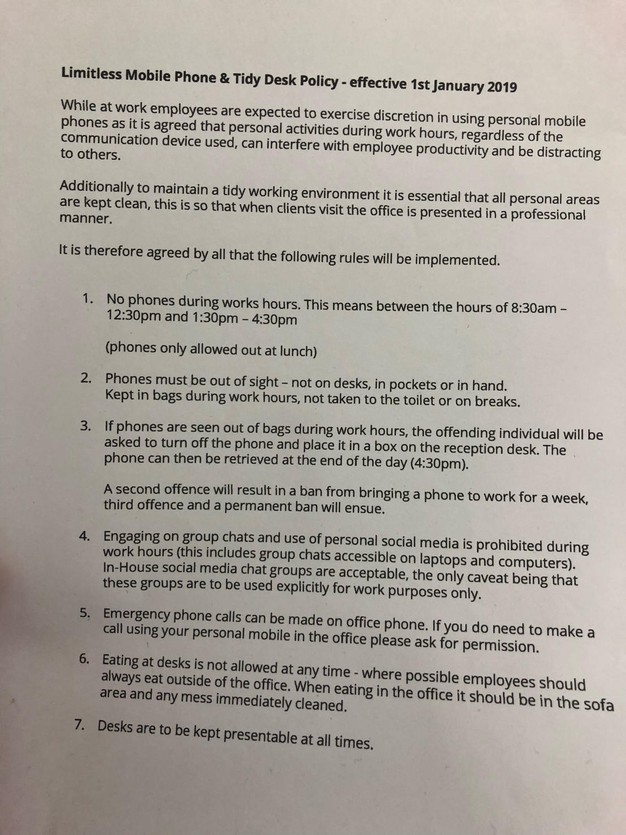 “Failure to close the photocopier lid is a disciplinary offence.” “No more than 1 person in the kitchen at any one time.” “The toilet roll is kept in the managing partners office and must be returned after use.”

This morning I was looking at a post on LinkedIn which generated a lot of comments and interest. The post is about a mobile phone policy which a content marketing business has felt it needed to implement, apparently written, according to the managing director, by the younger staff, and not by management.

Now, reading the comments, it’s suggested by some that this is a clever piece of content marketing to demonstrate the businesses ability to get engagement, but whether it is or not, I’ve seen that policy before, often, in law firms.

The policies in the opening paragraph of this blog are not made up for clickbait. They are policies which were in place in the first law firm I worked in. Now we’re talking 22 years ago, but just last year someone sent me a picture of a sign on the back of a bathroom door (which clients can use) which said in red capitals – DO NOT LEAVE THIS TOILET WITHOUT CHECKING IT HAS FLUSHED PROPERLY. IF NECESSARY, FLUSH AGAIN.

I find myself reflecting on what is happening in these businesses to motivate people to write such things, what are their frustrations, concerns, worries? Worries about productivity, wasted costs, cleanliness, and in respect of the mobile phone policy, possibly security. These are absolutely legitimate issues which need to be addressed, but I would suggest that sometimes the ways these policies are written is counterproductive.

Whilst the policy or notice itself may have the desired effect – we never left the photocopier lid up for example, what does this do for morale, and culture. Now this isn’t my area, I know people much better placed to talk about culture, but I do know about policies, and I would urge anyone writing them to think about the unintended consequences. Whenever we introduce controls, unless people properly understand the rationale, there is a risk they won’t comply. That they’ll dismiss it and will work around it.

Also consider how the policy might be interpreted. Avoid writing them when you’re frustrated! In one of the comments the MD of the company with the mobile policy was asked did it apply to him, and he said, he needed his mobile phone on the desk, and he could “restrain himself” from getting drawn into social interaction during the day.

I recently caught a Simon Sinek (who I love!) video about allowing our children access to mobile phones is damaging them and ultimately causing a problem for managers in the work place as people are addicted to them. I don’t disagree with him, but dismissing this as – they can’t restrain themselves, so I am going to threaten them with a ban – doesn’t seem to me to be the best way of tackling this.

Communication, explaining the impact, understanding why it is an issue, and arriving at a negotiated solution is going to be much better than issuing policies which can alienate people, breed resentment, and cause exactly the lack of productivity you were afraid of in the first place.

Be mindful when writing your policies, leave aside for a moment what your intention is, and put your self in the mind of the reader. Am I saying what I mean, will they understand why we need it to be this way, will they feel talked down to by the language? The more engaged the reader is, the more likely they are to comply.